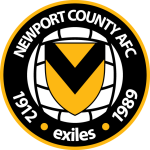 Two sides with playoff ambitions will come head-to-head on Saturday afternoon, when Newport County host Harrogate Town at Rodney Parade. The hosts currently occupy the final top seven position in League Two, with the visitors five points behind in 13th.

An inability to put together a run of consistent results has cost Newport so far this season, as they have only registered consecutive wins twice all season. Disappointing 2-0 losers last time out against Salford City, the Exiles are now three matches in the league without a victory. Failure to take three points on Saturday would represent Newport’s longest winless run of the season.

Performances as hosts have not helped the Exiles’ playoff push, as they rank 11th for points taken during League Two home matches this season. That’s compared to their much-better standing of sixth for results on the road, something which Harrogate will be keen to capitalise on this weekend.

In just their second-ever Football League campaign, Harrogate have done well to navigate any potential relegation scraps, with the Yorkshire club’s next target a push for the playoffs. Winners in their only league fixture for the calendar year, Harrogate suffered a humbling 4-0 loss to Championship Luton Town in the FA Cup Third Round, which now allows manager Simon Weaver to concentrate solely on his side’s league form.

Much-like Saturday’s opponents, Harrogate have fared well on the road this season, picking up 17 points from their 11 away matches so far. That no doubt spells bad news for Newport, who are already winless in their last two meetings with the Yorkshire outfit. Granted, those two matches did come away from home for Newport, with this weekend’s hosts winners the previous time the pair met at Rodney Parade in October 2020.

Desperate for an upturn in their fortunes at home, expect Newport to squeeze past a spirited Harrogate side.

Having wasted no time in the transfer market, both James Waite and Josh Pask could make their Exiles’ debut this weekend. Waite has joined the Welsh club on a permanent deal from Penybont FC, whilst Pask has arrived on loan from Coventry City.

After being appointed in October, manager James Rowberry is finally having the opportunity to shape his side how he sees fit, with the pair likely to feature alongside mainstays, such as Finn Azaz, Courtney Baker-Richardson and Alex Fisher.

For Harrogate, their activity in the transfer market has focused around players going the opposite way, with the club this week announcing they had accepted a bid for Connor Hall. The 28-year-old centre half moves on from the Yorkshire side after a successful four year stint.

Weaver will be hoping January doesn’t bring about anymore unwanted departures, not least for top goal scorer Luke Armstrong. His nine goals have been crucial for Harrogate this season, and he will look to be supplied by Josh Falkingham and Lloyd Kerry in midfield.